Baptism is the act of being immersed or dipped in water to symbolize new life. There are many different ways and styles that people baptize, but most people agree that it is a symbol of change in your life. More specifically, the act of Baptism is something that God has commanded in His Word. All throughout the Book of Acts we see that whenever people get saved they get baptized afterwards. Jesus himself gave us an example when John the Baptist baptized him.  Matthew 28:19 tells us that when we go to reach the world with the Gospel we are supposed to baptize the believers.

What is the correct way to baptize?  This is a huge debate among Christians, and an issue that divides entire denominations. Sprinkling, pouring, and immersion are the three primary modes of baptism.  Sprinkling is done by taking some water and sprinkling it over someone.  Roman Catholics and Presbyterians are two groups that use this method of baptism. Pouring is similar except they use a little more water and actually pour it onto the person. It is interchanged with sprinkling in several denominations. The Episcopal Church generally practices pouring in their baptisms. Baptism by immersion is where the whole body of the person is dunked under water. The Baptist are the primary denomination to use this mode.

I personally believe that immersion is the Biblically correct way to baptize. In Romans chapter six we see that baptism is an illustration. It is an illustration of what Jesus has done for us. It says in verse four that we were buried with Christ in His death. So when Christ died, we died with him. We are then resurrected with Christ. Immersion baptism totally illustrates this point. When we are submersed under the water it shows that we are with Christ in His death. When we are lifted up out of the water this parallels with Christ’s resurrection. Think about trying to use mode of sprinkling as an example for what Christ did in our lives. It would totally distort the picture and would not fit. In Matthew 3:16 Jesus is getting baptized by John the Baptist, and the verse says that Jesus came straightway out of the water. This means that Jesus was in a body of water. In fact, we know that this body of water was the River Jordan. (Mark 1:5) Why would Jesus go into the Jordan River if he was just going to be sprinkled? He could have just stood on the bank, got a cup, and have John pour a little water on Him. No! Jesus was immersed when he was baptized. In Acts, we see that this was true as well. After the Ethiopian eunuch believes on Christ, he wants to get baptized. He could have just pulled out his water skin and asked Philip to sprinkle him. But no, he waits until there is a body water before he asked to be baptized. The Bible is clear on what mode of Baptism we should practice. Immersion is the only Biblically correct method of baptizing. 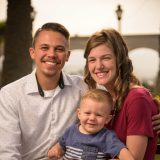